This site is hosted courtesy of Heart Internet

On Tuesday, 10th March a speeding van crashed into a garden wall on Main Road demolishing a large part of  it before driving off.

Chris Brooke was shocked and left very shaken when she saw the damage the van had done. Fortunately no one was hurt, but, as Chris said:  "If anyone had been walking along the path at the time they wouldn't have stood a chance."

Five hours later the culprit returned to say he was sorry, and that he hadn't realised he'd hit the wall. He said he didn't stop because  he  was  on  his way to an urgent appointment.

Speeding drivers have been a bone of contention in Skeffling for many years. The Parish Council started asking the police for speed monitoring in 2002 when it was obvious the 30mph signs weren't calming the traffic.

Fortunately there have been no fatalities, but there have  been  quite  a  few ‘near     misses'     involving

Cllr. Mike Turnbull, Chairman of Skeffling Parish Council said:  "We desperately need speed calming measures.  I have brought this up at several meetings and have been told that nothing can be done until there are accidents.  Apparently speed calming measures are deemed to be an accident ‘hot spot'."

At the next Easington Liaison meeting with BP, Centrica and Gassco the matter will be discussed again.  It is hoped the Humberside Police Liaison Committee will be there to hear the concerns of local people.

BP and Centrica have said they will remind their staff and contractors again about the importance of behaving appropriately when driving in and around the villages.  They particularly stressed speeding  and  throwing litter from moving vehicles.

The next Easington Liaison meeting will take place  on  Tuesday,  7  July at Easington Community Hall.   It  starts  at  6.15pm,

and any resident who has concerns about speeding, dangerous driving, or any other matter, are urged to go to the meeting and be heard.

In the meantime, if residents see anything they feel the police should be informed about or anybody acting suspiciously they are urged to call 0845 6060222.

The public meeting held on the 26th February in aid of St. Helen's was a great success.

It was very well attended, and quite a few good ideas were put forward for fund raising events.

The Vicar, Stephen Cope, gave a photo presentation to outline the damage to the church which brought home to everyone the seriousness of the situation.  During the discussion  which  followed it was agreed that if the work wasn't carried out Skeffling would lose St. Helen's as a place of worship, and no one wants to see this happen.

After the meeting Lynda Payne, Chairman of the Village Hall Committee, presented Reverend Cope with a cheque for £250 to start the Restoration Fund.  This got the fund off to a really good start and with so many fund raising events in the pipeline it will soon be added to.

Thank you to everyone who came to the meeting, and  for  the  bright  ideas you brought with you.

Easington Community Hall was teeming with people for their coffee morning in aid of St. Helen's Church.

"We all have a very fond affection for Skeffling, its Church and its people," Di Horncastle told me. "Lots of those supporting this morning have lived  in Skeffling at some time, or have relatives  and very dear friends there."

She has asked me to pass on her sincerest thanks to everyone who donated prizes for the tombola and raffle, baked the cakes and brought bric-a-brac. There were also financial donations. It all went  to  making  the morning a tremendous success, and raised £432 for St. Helen's.

The money will be passed on to Margaret Roberts, Treasurer of St. Helen's Church.

A couple of years ago we held a Grass-a-Thon at Skeffling  Village  Hall  to give it a serious tidy-up.

Can we do the same again for St. Helen's?

The main one is keeping the grass cut in the Churchyard and making it tidy.

Believe it or not, it's now officially Spring and you'll have noticed the grass is beginning to grow.  Those dedicated           gardeners

amongst you will soon be getting the mowers out and giving the lawn it's first cut of the season.

A few people have volunteered  to  cut  the grass at St. Helen's during the summer, but they could do with a helping hand for that first cut.  There's always plenty to do eradicating the effects of the dire winter we've just had.  Mowing, strimming, weeding, you know the score.

We'll be into British Summer Time then so there'll be an extra hour of daylight, and if you're at a loose  end  why  not volunteer to help out with that first cut at St. Helen's.

Please bring your own gardening tools.  Petrol mowers and strimmers (there's no electric at the church!), spades, forks, shovels, and loads of energy.

Weather permitting, 2pm seems like a good time to start.  It'll be great to see you there.  So make a note on your calendar, Sunday, 29 March, 2pm, St. Helen's Grass-a-Thon.

If you have an Earlybird Bus Pass, it's time to renew  it.   Your  current pass expires on the 31st March.

Application forms are available at Withernsea Customer  Service  Centre or the Library. You'll also need two photographs, and your current Earlybird Bus Pass to go with the form.  The cost has gone up this year.  It will now be £25.

If you haven't had an Earlybird Bus Pass before as well as two photographs you'll need proof of your age or eligibility for the pass, and something with your current address such as a utility bill.

Take everything along to the Customer Service Centre  or  Library  and they'll issue your pass straight away.

Most of you will already know that everyone who caters for the public should have a Health and Hygiene Certificate which must be renewed every 3 years.  This is now called Level II Certificate  in  Food  Safety in Catering.

If you need to renew your Certificate, or want to get one, a course has been organised for Wednesday, 22nd April at Easington Community Hall.  The day long course is from 9.30am to 4pm and the cost per person is £27.

To book your place on the course, or for more information, please ring Di Horncastle on 650498.

Are you having trouble with your Orange network signal?

It seems a few people in the area are having problems with signal strength and are not too happy with Orange at the moment.

Now and again you get five bars, and other times you get nothing at all.

If this sounds familiar please register your complaint with Orange.

Now, here's the interesting bit, you should ring 150 to contact Orange, but if you can't get a signal how do you do that?

So if you're having problems please phone Orange  and  tell  them.   If

enough people complain they'll do something about strengthening the signal.  If you don't complain nothing will change.

Good news!  The glove found in the car park after Burn's Night has been reunited with its partner.

If you've lost something, or found something, I'll be happy to put it in Skeff News.  The success rate so far is 100%!

If you'd like to be absolutely positive when the Blue Bins will be collected, you can ask East Riding Council to send you a text message. It's a free service, and they'll send you a prompt the day before the collection is due.  To get this service text Blue 07786 201286.

The Mobile Library will be in Skeffling on Wednesdays, 25 March and 8 April. It will be arriving  at  the  top  of Church Road at 11.15am, and staying for about 30 minutes.

It's very easy to join.  You need two proofs of identity such as the electric bill and something with your signature on, and that's it. The staff are very friendly and helpful, and if you'd prefer to listen instead of read,  there's a wide selection of audio tapes which are free of charge.

Cllr. Robinson reported that after speaking to Rachel Walker of Yorkshire Water regarding the filtration   plant,   she   has

assured him she is progressing with the list of problems the Council had given her.

The Parish Plan has now finally been completed.  The end of project report was sent to Awards for All which were more than happy with the work done by  the  Steering  Group. The Steering Group will be reconvened in the near future to discuss projects which can be taken forward.

The next Parish Council meeting will be held on Tuesday, 7th April at 7.30pm in the Village Hall.

Fresh vegetables such as onions, carrots and potatoes.  Local free range eggs.  The prices are very competitive, too.

All you have to do is ring Paddock Produce of Easington on 01964 650362 and they'll deliver it all locally, free of charge. 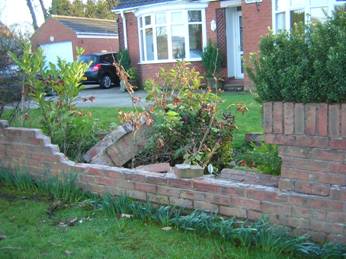