Last week it was decided by Humberside Police that the Community Speed Watch programme will go ahead.

This is good news as it has taken quite a few years of Councils pressurising the powers that be to recognise we do have a problem with speeding motorists in the villages.  Initially the programme will be piloted at Easington, Skeffling and Welwick, and if successful may be rolled out over a wider area.

However, this can only happen with the help of local volunteers.

If you would like to take part in the scheme there will be a meeting at Skeffling Village Hall on Sunday, 18th October starting at 5pm.  At the meeting you will have the opportunity to volunteer and be trained to use the equipment.  All the equipment will be supplied by Humberside Police.

If you would like to take part but cannot get to the meeting, please contact me on 650032 and I will pass your details on to the police.  Or you can contact PCSO Phil Wriglesworth directly at Withernsea Police Station or by email at:  philip.wriglesworth@ humberside.pnn.police.uk.

At his Concert on the 26th September Martin proved he's not just a magnificent singer, he's an all       round     entertainer.

jokes in the middle of songs without missing a beat, and when he decided to help Dot with the raffle she went all of a dither!

Thank you Martin for a terrific night.

If you want to see him again, he's on at Hull City Hall on Monday, 19th October.  It's the Autumn Spectacular 2009 in aid of THE ECHOES FOUNDATION and THE BRITISH HEART FOUNDATION.

If you'd like to see a short video of the night it's on Toni's Blog.  Just click on Comments where you'll find a link to the video.

Concert that night, she helped prepare Skeffling Village   Hall   for  the social       evening,      then

Not on your life!

At 10.30 Julie, daughter Vicky, and six friends left the Village Hall to take part in the Marie Curie Cancer walk over the Humber Bridge which began at midnight!

Dressed as Doctors and Nurses (we won't go into that) they left the Village Hall  to  resounding applause and set off for Hull.

The Humber Bridge is 3.3 miles long, and when they got to the other side they had to walk all the way back again!

I was assured, VERY firmly, by one of the ladies, that they were doing the walk SOBER!

and money is still coming in!

In addition to that a donations box was passed around at the Village Hall during the evening which raised another £22 and some change.

Congratulations, ladies, you did a wonderful job for a very worthwhile charity.

This year the Martin Jackson Concert was in aid of Bonfire Night at Skeffling Village Hall, and £120 was raised.

The festivities will, of course, be on Thursday, 5th November.  Burgers and Hot Dogs will be ready by 6pm and the fireworks will start at 6.45pm.

The kitchen will be open for hot soup, tea and coffee, but will be closed when the fireworks start so the Village Hall committee can watch them, too.

Once again there will be a spectacular display so please don't bring your own fireworks, we've got loads!

The annual Xmas Coffee Morning will be held on Saturday, 28th November at Skeffling Village Hall between 10am - 12noon.

All your favourites will be there.  Cake stall, raffle, bric-a-brac, tombola, etc.

You'll also be able to have breakfast as there'll be bacon sandwiches, tea and coffee.

All the money raised will go to the Fabric of St. Helen's.

exhibition at Easington Community Hall outlining BTs plans for the proposed wind turbine farm to be situated close to Main Road between Easington and Skeffling.

Leaflets had been printed advertising the exhibition and should have been distributed to every house in Easington and Skeffling. Did you receive one?

As BT is looking at this site for the proposed 5 wind turbines it will affect the majority of people in the two villages.  Consultations will, hopefully, take place to see how residents feel about this.  So far there aren't any firm details available about BTs wind farm.

Local opinion currently seems to be opposed to the plan.  A vast number of people are asking why here?  Haven't we got enough with an ever increasing gas site, seven wind turbines and an off-shore development with electricity landfall in the area.

Have we reached saturation point?

There doesn't, as yet, seem to be a time line for this project, but Skeffling News will keep you as up to date as possible.

If you DID receive a BT leaflet advertising the exhibition in Easington I'd be very interested to know. Liddell Thomson are convinced a leaflet went to every house.

At the beginning of the meeting PCSO Phil Wriglesworth outlined the new Community Speed Watch project.  This particular project has been in the pipeline for some months and has now had the go ahead from Humberside Police.

Members of the public will be asked to volunteer and be trained by the police to monitor speeding traffic along the B1445. Easington, Skeffling and Welwick will be involved and have their own volunteers.  All the equipment will be supplied by Humberside Police and volunteers will be trained by them.

A meeting will be held at Skeffling Village Hall at 5pm on Sunday, 18th October to sign up volunteers and give them the    necessary    training.

The project will be up and running at the end of October.

Having given a lot of thought to putting a see-saw in the play area, Cllr. Robinson feels it would be unwise to go ahead with it.  After discussing the matter with other Councillors he has concluded there could be too many opportunities for accidents, especially if the children are not supervised by adults.  A suitable new item for the play area will be considered.

Cllr. Turnbull said the fencing needs to be repaired quickly, and the swings need painting. Councillors will find a suitable date for the work to start.  Sand and gravel will be bought for the concrete posts to be placed.

The work on Streetscene has now been completed, although a few things have been missed.  Cllr. Robinson has spoken to Mike Peeke of Highways Department who is happy to do the work.  The footpath in Chapel Lane between the bus stop and Sun Inn needs urgent repair as it has deteriorated badly.

Centre regarding the proposed Wind Turbine Farm.  Cllr. Turnbull said the Council will be writing to Liddell Thomson, Consultant for BT, with the Council's views.  A copy of the letter will be sent to Cllr. Richard Stead.

The Play Area inspection fee for this year will be £80 plus £3 admin charges.  It was agreed that as Cllr. Turnbull is qualified to carry out the inspection he will do it.

At Public Speaking, Mrs. Parsonage said there is a rumour spreading in Skeffling that speeding is not being monitored regularly.  She emphasised that Skeffling is being given more attention in this matter than other villages. In fact, a lot of other villages have been turned down for action on speeding.

The next meeting of the Council will be on Tuesday, 3rd November.

This month the Police Surgery will be held on Wednesday, 21 October between 7 - 8pm.

If you have any concerns the police at the surgery will be more than happy to help you.

The next blue bin day is  on Friday, 23 October.

If you'd like to be absolutely positive when the Blue Bins will be collected , you can ask East Riding Council to send you a text message. It's a free service, and they'll send you a prompt the day before the collection is due.  To get this service text 'Blue' to 07786 201286.

The next brown bin collections will be on Thursdays, 15 and 29 October.

The Mobile Library will be in Skeffling on Wednesday, 21 October and 4 November. It will be at the top of Church Road at 11.15am, and stay for 30 minutes.

For a few months now I've been thinking about having a Website of my own. Having watched our local Skeffling Website expand and become more popular the idea grew on me.

With an enormous amount of work from Thomas Hessell, and a lot of tantrums and hysteria from me, we finally got the idea in my head onto paper in a form I hope people will find attractive and entertaining.

I'm now very happy to announce that LOVE ZONE has been under construction for a couple of months and is almost ready to be launched.

My aim is to have it 'live and on the internet' sometime on Thursday, 15th October...

What's it all about?

This is the web address to go straight to the Blogs pages.  From there you can sign up to Skeffling Chatter and have your say on any subject.  See you there! 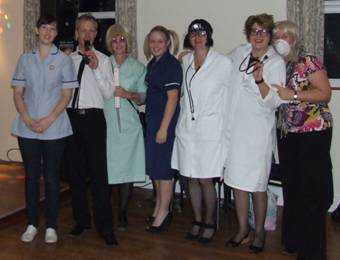