The news of Bernard's tragic death was a shock to all who knew him.  In Bernard we lost a real friend and a true gentleman.

People from all over the country came to his funeral, the field was covered with cars and the Police and Neighbourhood Watch were on hand as Welwick was brought to a standstill by Bernard's final journey.  St. Mary's Church was full, as was the marquee in the garden of Bernard's farmhouse, so many had come to pay their last respects to such a wonderful man.

When the time for the funeral drew closer the Church bells tolled 82 times, one for every year of Bernard's life.  As the coffin was brought into the Church wry smiles and a few tears were shed at the sight of Bernard's cap sitting on top next to the floral tribute.

There was sadness and laughter, too, as memories of Bernard's life and exploits were told by Maurice Wood.  The service    was    taken    by

Rev. Harris who said that Bernard was an honest, straight forward man.  A man of great principles.

Bernard will be remembered for many things, especially his fund raising.  He had the charm to tease money out of anyone's pocket, and he put every penny raised towards benefiting others.

When Bernard started the Good Friday Welwick Bike ride he couldn't have known how it would grow over the years.  It quickly became a favourite with everyone on the route from Welwick to Kilnsea.  This year it was held in memory of Bernard, a fitting tribute to a man who did so much for others.

Bernard will be sadly missed at many events. Carol Singing won't be the same without his Hurdy Gurdy, and there'll be an empty space outside the Village Hall on Bonfire Night in Skeffling.  Those are the times when our memories will be so precious, when we'll think of that lovely man affectionately known as 'The Welwick Relic',

We've lost Bernard but his legacy of giving will never leave us.  It's up to those of us who knew him to keep his spirit alive, and to take the tremendous work he did forward.  It's up to us now, and we won't let Bernard down.

On behalf of everyone in Skeffling who knew Bernard, Skeffling News would like to send love and condolences to Mary and the family.

If you bought raffle tickets for the Welwick Bike Ride and haven't been able to check if you're a winner, there's a list of winning numbers in Skeffling Post Office.  If you can't get there, please give Sue a ring on 650330 and she'll check them for you.

In July 2009 Mike Turnbull had a stroke.  It was sudden, totally unexpected, and could happen to any of us at any time.

Mike received excellent care in the stroke ward of Hull Royal Infirmary during his two week stay, and has made a full recovery.  Getting back to full health took a while, but Mike was determined to regain his health and, with the love and support of his family, he made it   He's just received the 'all clear' from his consultant and living life to the full again.

To show that having a stroke needn't be the end of an active life Mike is soon to embark on an extremely ambitious bike ride which would deter most people. Along with Gaz Watts he's going to travel the Trans Pennine Way, a total of 220 miles!

On the 24th May they will be starting the journey from Southport, on the West Coast, following the route and finishing at Hornsea the following weekend. They're hoping to do 30 to 50  miles   a  day,  weather

permitting, and camping out along the route.  Not only are they taking the tent, but all the supplies and camping equipment they'll need for the entire journey.  Panniers have been purchased to accommodate all of it!

Mike has a very special reason for doing this, he wants to raise money to help the Stroke Ward at Hull Royal Infirmary buy a desperately needed scanner.

A lot of people have already signed up to sponsor Mike and Gaz, and sponsorship forms are available from Sue at the Post Office.  If you'd prefer give Sue or Mike a ring on 650330 and pledge your donation.

Both Mike and Gaz have my total admiration for taking on such a daunting challenge, and I'm now off to fill in the sponsorship form...

We'll Meet Again... And everyone at the 40s night are hoping we'll be meeting Cherie Lawrence again. What a superb singer she is,  a   lovely  lady  with  an

equally lovely personality. She enjoyed being at Skeffling so much she didn't stop singing till midnight!

It was good to see so many people enter into the spirit of things and dress up in 40’s style.  There were Land Army girls, people in uniform, dresses and hairstyles straight from the war years.  The Village Hall was decorated with Union Jacks and supper was Woolton (not Walton, I was sternly told) Pie with a twist.  The twist was steak! During the war it was vegetable pie, but some very tender steak was added for the 40’s night.

All the proceeds from the night will go to the Breast Cancer Unit at Castle Hill Hospital.  Amazingly the night raised £541!  The Village Hall committee have asked me to thank everyone very much for their donations and generosity.  It's a fantastic sum and will be put to excellent use.

Every year the Village Hall committee choose a charity to which all donations will go.  This year it was The Breast Unit at    Castle   Hill   Hospital.

Julie Newsam recently sent them a cheque totalling £1,307.97p. This is the reply from the Unit...

I would just like to thank you sincerely for your very generous donation that we received from your fund raising events.

We are always grateful for donations as we can put this money to making a difference to other unfortunate people with breast cancer and its treatments. We propose to spend the money on patient benefit and hope this will make       their        journey

more pleasant during a difficult time.

Thank you so much again for your kindness.

From Sister Pearson and the nursing team.

Many, many thanks for your generous support from the Village Hall committee.

Have you got an old, redundant, mobile phone lurking in the back of a drawer?  Or maybe the odd ink cartridge lying about? Don't waste them by throwing them in the bin. The RNLI will happily take them off your hands and convert them into much needed funds.

Please put them in the attached envelope and send them to RNLI Freepost.  They do a wonderful job of saving lives at sea, and with summer coming on they'll be busy. Your old phones and ink cartridges will be a much appreciated donation.

There are two black female kittens, 3 months old, who are in desperate need of a loving, caring home.  They're sisters and have asked that they stay together as they love each other very much and couldn't face being apart.

grave of John Mitchinson, who died on 25 April 1787, was badly damaged.  It was thought to be the oldest headstone in the churchyard and had remained intact for 230 years.

At first it was thought the headstone was beyond repair but, happily, Mr Mitchinson's headstone has now been repaired and is back at the Church.

It was given expert treatment by Matthew of G.H.Wriglesworth Limited of Walton Street, Hull.  The renovation was done using pinning and dowelling and was repaired absolute free of charge.

Thank you, Matthew, for helping Skeffling to preserve a small part of its heritage.

If you need a stone mason why not have a look at www.jrotherham.co.uk They did an excellent job for the headstone, and as a result come highly recommended.

The Council meeting scheduled for 6th April 2010 was cancelled as some Councillors were working or had been away for Easter and couldn't get back in time for the meeting.

Blue bin collection is on Friday, 16 April and 14 May

If you'd like to be absolutely positive you don't miss it, you can ask East Riding Council to send you a text message.

The next brown bin collections will be on Thursday 22 April, 7 May, 20 May.

The Mobile Library will be in Skeffling on Wednesdays, 21 April and 5 May. It will be arriving at the top of Church Road at 11.15am, and staying for about 30 minutes.

It's very easy to join.  You need two proofs of identity such as an electric bill and something with your signature on, and that's it. The staff are very friendly and helpful, and if you'd prefer to listen instead of read,  there's a wide selection of audio tapes and CDs which are free of charge.

This month the Police Surgery will be held on Wednesday, 21 April 7-8pm.

If you have any concerns the police at the surgery will be more than happy to help you.

If you have any news items you'd like to see in Skeffling News, please give me a ring on 650032 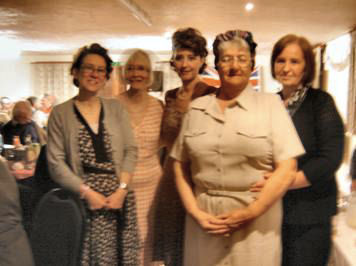