If you've been following my blog on Skeffling Chatter, or seen the Gazette, you'll know that Skeffling has been given a very prestigious award.

We knew Skeffling had been shortlisted in the Best Community Installation category of the Microgeneration Awards but didn't imagine we would win.  James Robinson and I went to the presentation dinner in York and discovered we were on a shortlist of four which included The National Trust and Doncaster City Council.

So it was an amazing moment when they announced Skeffling had won!   James, looking totally bemused, collected the Award from Paul Hudson, weatherman for Look North, and a list of Skeffling's achievements to combat global warming were read out.  James was very glad he didn't have to give a 'Thank You...' speech.  Well, it wasn't the Oscars!

It's a wonderful tribute to our village, and heart-warming to be recognised for  all  the  hard  work  the

whole village has done since we decided to do our bit to save the planet.

Well done, everyone. Keep up the good work.

Since the article appeared in last month's Skeffling News, and last week in the Gazette, I have been inundated with comments about Yorkshire Wildlife Trust and the RSPCA.

In addition to the publication of the photograph I have posted a blog on Skeffling Chatter with my own personal views, then put it on my Facebook page.  From the encouraging response I sent an email to Yorkshire Wildlife Trust with a copy of Skeffling News, and followed this up with a letter and a hard copy of the newsletter asking for their comments and promising to publish them in Skeffling News.

This morning I had a reply from Dr. Rob Stoneman of Yorkshire   Wildlife   Trust.

He starts by saying he too was horrified by the poor animal's suffering, and while deer very rarely get trapped on barbed wire, it does happen.  He justifies the use of barbed wire on their  nature  reserves  as:

"farmers throughout the country who manage livestock use it as it is effective in keeping stock inside the fencing.  Without fencing, the precious flower-rich meadows and the birds, butterflies and other insects the site supports would be lost to scrub".

Dr. Stoneman finishes by saying  "The last thing we want to do is accidentally kill a beautiful animal such as roe deer.  Hodgson's Fields represent one of the last patches of this rare (unimproved) grassland in Holderness and it would be so sad for them to be lost to scrub".

At least Yorkshire Wildlife Trust now know about the incident at Hodgson's Field. From their letter the barbed wire is here to stay and they believe they are managing the land properly.

It's slightly disconcerting to know that this kind of injury to deer could happen again.

However, there is help available right here in Skeffling.  Please see the following article and make a note of the phone number.

The day after Skeffling News was delivered last month I had a phone call from Mike Wright of Golden Hope, Out Newton Road. He was absolutely incensed by the suffering caused to the deer in Hodgson's Field and the problem with the RSPCA.

For some time now Mike's been planning a rescue centre and small boarding kennels at Golden Hope.  It will take some time before it's ready, but until  then  he  is more than

happy to give any assistance necessary to help treat birds or animals found injured.

He has a list of willing volunteers with the necessary qualifications who will come out to Skeffling and give any help needed.  Please make a note of Mike's number in case you need it.  07850 795765.

At the moment Mike's plan for a rescue centre and small boarding kennel is still in its infancy and he would appreciate your comments.  He has no intention of creating a charity from this venture, he just wants to help injured animals.  His hope is that the small boarding kennel would finance the rescue centre.  In the meantime he would appreciate any comments you may have about his plan, good or bad.

If you do find any injured birds or animals while you're out enjoying the countryside please ask Mike for his help.  He'll be only too willing.

Afternoon tea at the Village Hall on 27th February was a tremendous success. Within half an hour all the Tombola prizes had been won, and the cake stall had almost sold out.

The sole object of the afternoon was to raise money for the Village Hall's named charity of the year.

The Breast Care Unit at Castle Hill Hospital.  And they did just that - £309 to be precise!

Congratulations to the Village Hall Committee for all the hard work they've done this year.

It's not just the Committee who works hard for the village, it's all the people who help out at the various events.  In particular I'd like to mention Vicky and Rob Newsam.  I've said it before, but it's worth repeating, teenagers often get a bad press, so it's good to see Skeffling youngsters doing their bit for their village.  Vicky and Rob are shining examples.

This is a reminder to earmark Saturday, 27 March in red on your calendar.

It's the Village Hall's presentation of 40s night with music and food straight from the decade...

Cherie Lawrence will be providing the music, but it won't be all from the 1940s, she'll be singing modern stuff, too.

It's not obligatory, but now and again it's fun to dress up in something different!

Supper will be Walton pie with a twist!  I'll leave you to work that one out!  There are, however, the usually calorie free puddings with cream on the menu.

There's also a raffle, and any donations for this will be most welcome.

Look out for a few fun surprises on the night, too.

The idea for the 40s night came from Vicky, and the posters were researched and designed by Rob. Talent and creativity - I like it!

All the proceeds from this event will also go to the Breast Unit at Castle Hill Hospital.

A few months ago I wrote about toilets and what to put down them. Unfortunately, the message hasn't got through to everyone.  So here it is again.

The only things which should be put down the loo is natural bodily waste and toilet paper.

Anything else, such as sanitary products, nappies, J-cloths, baby wipes, etc., do not break down.  They stay as they are and cause problems with the filtration pump.  In fact it has blocked the system several times and stopped it doing what it should do - get rid of the water.  The pump has then had to be cleared.

We're not all on the main sewerage system and septic tanks, etc., can't cope with these manufactured products. Bleach also harms the natural working of septic tanks as it kills the germs and stops the solids being reduced to liquid.

Please use bleach VERY sparingly, if at all.    Please think before you bung up the system, and don't use your loo as a dustbin.

Once again there have been complaints of dogs fouling gardens and footpaths in the village.

Please, please, please take plastic bags with you when you walk your dog and clear up after them.  To leave the offending matter on the ground is unhygienic and dangerous.

Just to remind everyone, if an offender is caught they may be issued a fixed penalty charge of £75 or fined a maximum of £1,000 if prosecuted.

If you see a stray dog or a dog fouling anywhere in the village please contact one of the Councillors.

The monthly Council meeting was held on 2 March 2010.

It was decided that a suitable place be found in the Village Hall to display the Microgeneration Award.

The Steering Group met on Monday, 8th February.  The members of the Group remain the same with the addition of Mrs. Chris Brooke.  Cllr. Turnbull also attended the meeting.

It was decided a detailed drawing be made of the seesaw, requested by children in the Parish Plan. The fencing needs repairing, and the container is to be cladded with goalposts painted on one side.  These projects have been delayed due to the bad winter weather, but will be completed as soon as possible.

The Emergency Plan has been passed to the Steering Group.  They will also look into footpaths and bridleways.  East Riding of Yorkshire Council say they will put signage on all pathways by the end of 2010.  Cllr. Payne will write to East Riding of Yorkshire Council regarding their plans for Skeffling. Gaz Watts and Cllr. Payne will  walk   the   footpaths,

taking photos where necessary.  It was agreed by the Council that the Steering Group go forward with this work.

The next meeting of the Council will be on Tuesday, 6 April.

This month's blue bin collection is on Friday, 19 March.

The next brown bin collections will be on Thursdays 11 and 25 March.

The Mobile Library will be in Skeffling on Wednesdays, 10 and 24  March. It will be arriving at the top of Church Road at 11.15am, and staying for about 30 minutes.

This month the Police Surgery will be held on Wednesday, 24 March between 3-4pm.    If you have any concerns the police at the surgery will be more than happy to help you. 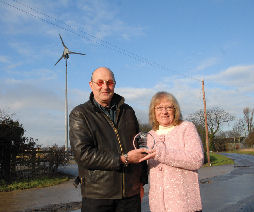